Since 1972 Motorsport has been our DNA

Nicholson McLaren has an enviable list of capabilities that are based on almost 50 years of Race engine and development experience in the industry that Spans from F1 to GT Racing and Lemans 24 hours.

Founded in 1972 by McLaren Racing and New Zealander John Nicholson to maintain and develop the Cosworth DFV engines for McLaren’s F1 team it was engines prepared by Nicholson McLaren that powered James Hunt to win the F1 World Championship in 1974 and Emerson Fittipaldi to win the F1 World Championship in 1976. In the decades since the 1970’s Nicholson McLaren have developed engines for numerous disciplines of motorsport to include : F3000, Group C, LMP 2, GT 4, British & International Hillclimb Championships, Speed Series, Grand Prix Masters, Classic Endurance Racing, Historic & Current engine types.

Today we are proud to specialise in maintaining and developing engines across a broad spectrum of world famous cars as diverse as the famous Silk Cut Jaguars, Jaegermeister Porsche 935 and Light Weight E Type Jaguars – to name but a few.

A rich & diverse history in Motorsport

It’s a well known fact the NME founder John Nicholson’s reputation as an engine builder in New Zealand earned him a coveted position from Bruce McLaren, for whom he built engines on McLaren CanAm and F5000 race cars from 1969 – cutting his teeth for McLaren on Chevy V8’s then Cosworth DFVs.

However, it’s a little known fact that once John subsequently set up his own business in the early seventies under the Nicholson McLaren name, that he would not only continue to service Cosworth DFV F1 engines for McLaren but also other F1 teams such as the little known Embassy Hill – driven by World Champion Graham Hill amongst others. 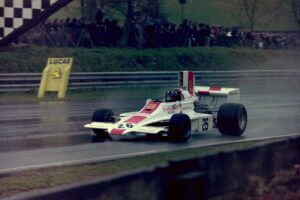 Having supported McLaren to win two F1 World Championships the classic DFV engine is a very important part of our company heritage and possibly the most successful engine in the history of F1. Although no longer part of our mainstream business our engineers have accumulated hundreds of hours working on the different variants of Cosworth DF series engines and the company retains the skills and enthusiasm required to maintain these engines when required.

The Cosworth XB engine started life as a turbo charged methanol fuelled motor for the late 1990’s Champ C Series. In total approx 40 – 50 engines were manufactured and in 2003 Nicholson McLaren was able to purchase the rights to the engine, complete engines and a complete spares package.

Following the purchase Nicholson McLaren re-engineered the engine to be normally aspirated and run on regular pump fuel. Three variants were developed 2.8. 3.3 & 3.5 which were campaigned in LMP, Speed championships and Hill Climb.

In 2003 Gould Racing chose the NME XB V8 engine to power their new hillclimb car called the GR55. Since the GR55 and the later GR55B were launched it has proven to be probably the most successful chassis and engine partnership in the 100 year history of British Hillclimb Championship having taken 13 Championship wins between 20003 and 2016. The NME XB V8 continues to be a serious contender in Hillclimb racing both in Europe and the UK.

Having won numerous Championships in Europe and Australia over the years the NME XB continues to be an extremely competitive motor – one that we are very proud of.

In the 1970’s the Matra designed MS76 V12 engine powered their MS 670 sportscars to race wins at Le Mans, the engine also powered the Matra MS 120 F1 cars and later the Ligier JS9 which was driven by Jacques Laffite.

Following what was a relatively short period of outstanding achievements the Matra motorsport team was disbanded, their cars were sold off to privateers or collectors and development of the MS76 engine ceased. In the main the cars remained as original until the early 2000’s when a private collector started their rebirth. Initially Nicholson McLaren re built a selection of period engines however due to the scarcity of parts we were commissioned to manufacture 10 completely new engines.

Information about the engines was limited, period engineering drawings were incomplete so many of the components had to be reverse engineered, digitally scanned or drawn so that patterns could be produced.

With new drawings completed by Nicholson McLaren the engine blocks, cylinder heads, crankshafts and all components were either manufactured inhouse or sourced via specialist manufacturers in the UK. The engines were assembled and tested in house before being installed in cars where they competed in Le Mans Classic, Historic Monaco and other significant races throughout Europe.

Over the years our engineers have developed, built and rebuilt numerous Nissan V6 Twin Turbo engines for Group C Endurance race cars such as the NISSAN liveried NPT-90 that was developed in 1990. Originally a highly successful engine developed for the IMSA GT Championship in 1989 it was improved for the NPT-90 to allow for more power output, including the addition of four valve cylinder heads to replace the two valve design. This remains a current engine for Nicholson McLaren and one that continues to race today.

The engineers at Nicholson McLaren have worked on a number of GT86 engines. The standard normally aspirated engine develops 200hp, as part of our an house development project the engine has been optimised to include the addition of a turbo charger and bespoke management system. On the dyno the Nicholson McLaren GT86 engine delivers in the region of 550 BHP.

When asked if we would build and develop some Jaguar 3.8 engines for racing the answer had to be yes. The company took what is already a well proven Motorsport engine and by applying our experience and technical know how we delivered engines that have proven to be reliable and competitive with various levels of success on the circuits of Europe.

We are very proud to be associated with yet another of the great Jaguar Sports Proto Type racing cars. Having completed rebuilds on a number of XJR 11 V6 engines it is another motor that we are very experienced with. We currently have engines competing in the European Classic Endurance Race series and we welcome enquiries should you have a road car with an engine that requires maintenance.

Our engineers have a vast experience of working on the Jaguar V12 competition engines, indeed one of the team actually worked on the engines in period. Although it is an It is an engine type that we work on currently over the years we have carried out development of the V12 engine in various configurations for both private clients and race teams who run some very special cars, the most famous of which is probably the Silk Cut liveried XJR 12 Sports Proto Type famous for winning the 1990 24 hours of Le Mans race.

In 2016 our engineers became involved with another famous car – the Kramer Porsche K3 developed as the factory version of the 911 twin turbo and prepared for FIA – Group 5 rules. The car had been in long term storage without running so the engine underwent a complete strip down, as part of our inspection process all key components were NDT crack tested in house, replacement parts were sourced as required and the engine had a comprehensive and meticulous rebuild ahead of bench testing on one of our dyno test beds. The engine is safely reinstalled in the Jagermeister liveried car and now resides in Japan.

Another Porsche flat 6 but this one is liquid cooled. Having received the engine after a terminal failure that resulted in a con rod exiting through the wall of the crankcase we knew that sourcing parts for this motor would be challenging. The most difficult parts to source was a replacement crank case, they do not exist and having a new crankcase manufactured would be costly with a long lead time. Fortunately, we managed to source a new (standard) crankcase which after many hours of fettling and modifications has been transformed to the correct specification. Other key parts such as pistons, valves & conrods were manufactured new whilst period cylinder heads were reconditioned.

Nicholson Mclaren have applied their resources and experience in developing the 3.8 engine for competition use in the E Type Jaguar where our clients have enjoyed various levels of success on the race circuits of Europe.

Nicholson McLaren provides development support and a verification service to Porsche GB for the current Carrera Cup series. Based on the 911 GT3 the cars on the grid have to be technically identical and with the engine producing 470 BHP reliability is key to a very exciting race series.

These engines are our heritage and our engineers remain enthusiastic in servicing or supporting these engines which in the main are raced in historic F1 series around the world.

Nicholson Mclaren has recently completed the restoration of the Porsche 935 twin turbo air – cooled engine from the famous Kramer (Jagermeister) car that will be raced in various events in 2016 to include the Le Mans Classic.

Another Porsche flat 6 but this one is water cooled. Having received the engine after a terminal failure and a con rod through the engine case sourcing parts was always going to be a problem. Fortunately, we managed to source a new (standard) engine casing which after many hours of fettling and with some modifications has been transformed to the correct specification. Pistons, rods and valves were designed and remanufactured whilst period cylinder heads were reworked. This engine will be a major campaigner in the 2016 European Classic Endurance Series and will also feature in the 2016 Le Mans Classic.

Matra was a French race car manufacturer that enjoyed success in the 1970s when their cars had outright wins in 24 hour Le Mans and great success in Formula 1. Nicholson Mclaren has recently completed a major project whereby over a 3-year program they reverse engineered the period Matra V12 engine and manufactured a total of 10 complete new engines inclusive of all ancillaries and fittings.

Nicholson McLaren have built a number of Jaguar V12 engines over the years that include the power plant for Lister as used in Le Mans 24 hours, Jaguar XJR 12 Le Mans and the fabulous Broadspeed XJ6 Touring Car.

Over the years Nicholson McLaren have built and rebuilt a number of Nissan V6 engines for Group C endurance racing. Producing in excess of 900 BHP these quad cam V6 motors are very highly engineered. We are delighted that they form part of our current client base.

The Cosworth XB engine started life as a turbo charged methanol fuelled motor for the late 1990’s Champ C Series. In total approx 40 – 50 engines were manufactured and in 2003 Nicholson McLaren was able to purchase the rights to the engine, complete engines and a complete spares package. Following the purchase Nicholson McLaren re-engineered the engine to be normally aspirated and run on regular pump fuel. Three variants were developed 2.8. 3.3 & 3.5 which were campaigned in LMP, Speed championships and Hill Climb. Having won numerous Championships in Europe and Australia over the years the NME XB continues to be an extremely competitive motor – one that we are very proud of.

The engineers at Nicholson McLaren are currently developing a performance enhanced upgrade of the GT86 engine that will be used for circuit racing in 2016. The standard normally aspirated 2.0 Boxer Engine produces 200hp, as part of our in house development the engine will be equipped with our own design specification internal components married to the introduction of a turbo charger and bespoke management package. Nicholson Mclaren engineers are expecting the engine will produce circa 550 BHP.